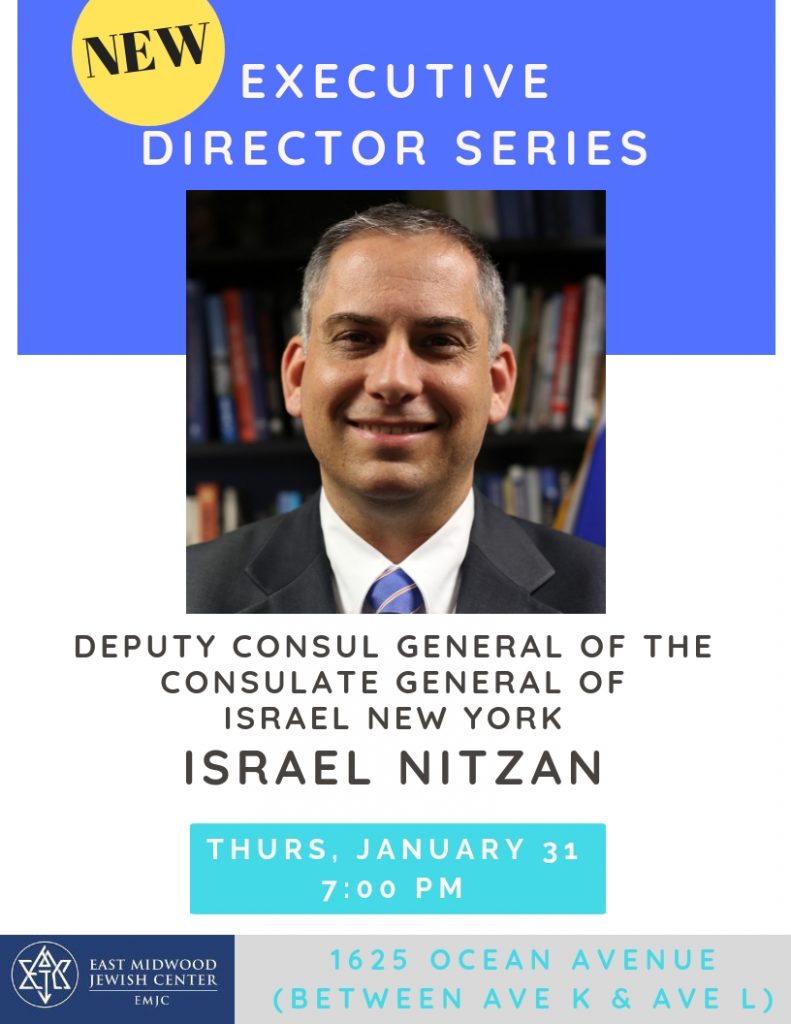 As part of the NEW Executive Director series at EMJC, we are proud to host this articulate, informed, and captivating speaker to address a wide variety of issues pertaining to Israel.

As Deputy Consul General of the Consulate General of Israel New York, the largest Israeli mission in the world, Israel Nitzan coordinates the political work of the Consulate in the five states within its jurisdiction. He develops relations with national, state, and local officials and acts as the liaison for the State of Israel to the national and local leadership of the Jewish community based in New York. In addition, he coordinates interfaith dialogue and outreach nationally for the Israeli Foreign Ministry and its missions in the United States.

Prior to his current appointment, Israel was the Director of the Foreign Ministry’s United Nations Political Affairs Department where he oversaw Israeli policies and actions within the U.N. system.

Before that, Israel served as Minister-Counselor for Political Affairs at the Permanent Mission of Israel to the U.N., where he spoke on behalf of Israel on the floor of the Security Council and numerous committees and coordinated with other U.N. Member States.

Previously, Israel served in the Arms Control Department where he worked to combat the proliferation of weapons of mass destruction around the world.

Israel’s other positions at the Ministry have included working within the South-East Asia Department and at the Center for Policy Research where he specialized on the Islamic world.

Israel is currently on his fourth foreign posting following two overseas positions at the Israeli Embassy in Cairo, Egypt. His first posting in Cairo was as Spokesperson from 2002 to 2005. In 2009 he returned there as the Deputy Chief of Mission until the Embassy was attacked and evacuated during the Egyptian Revolution of 2011.

Israel was born in Netanya in 1975. He completed his B.A. in Middle East History and International Relations from the Hebrew University of Jerusalem following his service in the Israel Defense Forces. In addition to Hebrew and English, Israel is fluent in Arabic and is married and a proud father of four.