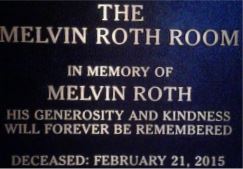 The children’s play room on the third floor, also known as the Herzl Room, has been renamed the Melvin Roth Room, in memory of the late Melvin Roth, a former member of the East Midwood Jewish Center.

Melvin Roth was born on April 17, 1919 and died February 21, 2015. He was a very honorable citizen, who took great pride in his country and was proud to serve in the US Army during World War II. He was a wonderful, kind and charitable man, who lived a life of integrity and generosity. Melvin and his brother Jerome endowed a marble wall in our lobby many years ago, and Melvin made a generous bequest to East Midwood Jewish Center in his will, which was recently probated.

May Melvin Roth’s memory be an inspiration to others.