As we all continue to process the events of last week, more details about the killing of Urban Dove student Devonte Lewis have emerged. The one detail that has most affected me was the fact that it was his first day of school. Somewhere along the line, Devonte got off track. He made certain decisions that got him to the place that he was. But at 17, he made another decision. Somehow, someone persuaded him that he would do better to be in school, that he could get “back on track,” that he could perhaps put the past behind him and start fresh. We have no idea what would have happened had the shooting not occurred. We have no way of knowing whether he would have stuck with it, or whether the forces that had pulled him off course would have pulled him back again. But there is something extraordinarily poignant about the possibility of one small act – in this case, the decision to return to school – turning a life around. As he was walking to his car, accompanied by his coach, moments before the shooting, he is reported to have said that it was a good day, and that he was eager to come back.

I didn’t know Devonte, and I don’t know much about his story. But there is, in this terrible tragedy, a redemptive narrative. We all have the potential to change; whether we can find it in ourselves to actually change is up to each one of us. But change begins by believing that we can, by finding the strength to act, and then by taking that first step. The fact that this process was just beginning for Devonte only compounds the tragic nature of the event.

It’s awfully difficult to wrap our minds around the issues at play here: too many guns on the streets; poverty; hopelessness born out of racial inequality and injustice. But it’s the difficult nature of the material that makes me want to drill down into it, to try to catch a glimpse of clarity, of meaning. I’m not afraid to look at the matter, in all its complexity. I want Devonte’s death to teach me something new, to give me a perspective that I don’t have. I want to hear a wide variety of voices. I feel that, insofar as any of us is to be an agent of change, we need to really understand how it is that two kids came and shot another kid over some (almost certainly petty) conflict. Let Devonte’s death be a catalyst, a framework, for our learning something about violence, race, poverty, and the panoply of social ills that this country faces.

We will be having an actual in-person event on Sunday, May 16, in the courtyard of EMJC. Ice cream, hanging out, and a few light words from me (no death or social ills, I promise). Please RSVP to Audrey (roomj@emjc.org). This is an experiment, and of course we will be observing strict COVID protocols, but if you’re feeling ready for an outing, this is your chance! This event is for everyone – all age groups, all generations, families, singles – come out and re-forge old connections (but please do RSVP).

Wednesday NightShul classes are on break. But there’s still lots going on. This coming Tuesday at 7:00 pm, we have a rare and exciting opportunity to learn with Rabbi Gordon Tucker, who will speak about Pirkei Avot Lev Shalem, a new edition of The Ethics of the Sages translated and with commentary by Rabbi Tucker and Rabbi Tamar Elad Applebaum. We have been using this volume in our weekly Shabbat evening study of Pirkei Avot, and now we’ll get to hear  about it first hand from one of its editors. We are co-sponsoring this event with B’nai Shalom of West Orange, NJ. The link is through B’nai Shalom and can be found in yesterday’s newsletter.

Also on Tuesday, at 8:00 pm, we will continue our monthly series Israel Now with Tomer Gekler.  Tomer’s interesting take on issues pertaining to Israel will be particularly relevant this week as we hear about how Israel is grappling with the terrible tragedy at Mount Meron, ongoing COVID issues, and further confusion around the last election and the creation of a new government. If you’re interested in Israeli goings-on, you won’t want to miss this. See yesterday’s newsletter for the link.

Next Thursday night, we’ll have an opportunity to hear and engage with Judy Batalion, author of The Light of Days: The Untold Story of Women Resistance Fighters in Hitler’s Ghettos. One    review said, “Judy Batalion has told the largely forgotten stories of the girl couriers, smugglers and fighters who formed the nerve center of Jewish resistance in occupied Poland. A breath-taking, dazzling work of historical resurrection.” This should be a great talk. We’ll send more information early next week. This event is sponsored by Congregation Torat El – Jersey Shore Jewish Center, who have graciously extended an invitation to us to attend.

Also, stay tuned for Elvis and the Jews, an examination of the many ways that the King of Rock and Roll was connected to the tribe (no, Elvis was not Jewish – sorry). That’s coming up in June. More on that later.

I also wanted to share an update on the Acosta-Molina family. I’m glad to announce that an outside supporter has donated a computer so the girls will be able to begin their studies in earnest. I’m sure this is thrilling news to them, and as we have a number of volunteers to help them with their English, everything is just about in place (they’ll pick the computer up on Sunday).

Donations have been coming in for the family too, but they’re going to need more help over the coming months. If you’re able to make a donation, it would be most appreciated. We had suggested a recurring $18/month donation or the equivalent, but of course any amount would be welcome. Those donations can be made easily through the donation button on the EMJC website – just note that it’s for the family.

If you’re curious about what Misael, Katy, Nicol, and Madaì have been up to in the last little while, here’s an update from Debbie Nathan, who is back in Texas now but is in regular contact with the family:

The Acosta-Molina family have had a productive several days since meeting the congregation on Zoom in late April. Sally Hipscher set up a contact for them with NYNICE (New Immigrant Community Empowerment), a Jackson Heights-based immigrants rights and services organization. Katy visited NICE’s office last week and was assisted in signing up Nicol and Madai for well-child vaccinations and physicals. They need these to enroll in school.

And early this week, the family was notified that a space awaits Nicole at a neighborhood P.S. She’s scheduled to be registered and have her first day of class by this coming Monday.

Nicole will celebrate her eighth birthday on May 19, but while trapped in Mexico she was cut off from schooling for almost two years. She is relieved and eager to finally be returning to her education. She talks about making friends and learning English. She’s got catching up to do, and is looking forward to being tutored by volunteer retired teachers from EMJC. A member has just donated a computer so that this can happen on Zoom.

The two girls are very bright, and I’m happy to report to you vintage New Yorkers that they and their parents are budding New Yorkers. This past Sunday they rode the subway for the first time, on a daylong jaunt to Central Park, the Museum of Natural History, and – the family’s absolute favorite – the Staten Island ferry. They’d been talking for days about the Statue of Liberty. And they went bananas over the MTA. Like all NYC kids, the girls drilled down into the alphabet-and-number soup of the subway routes, and got kind of obsessed about the subway map. It was something, seeing them take so quickly, and with such delight, to their new home.

Here are some great pictures that Debbie sent us: 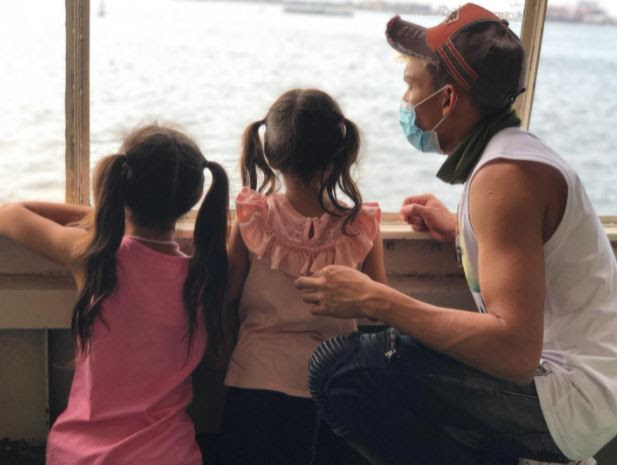 On the Staten Island ferry 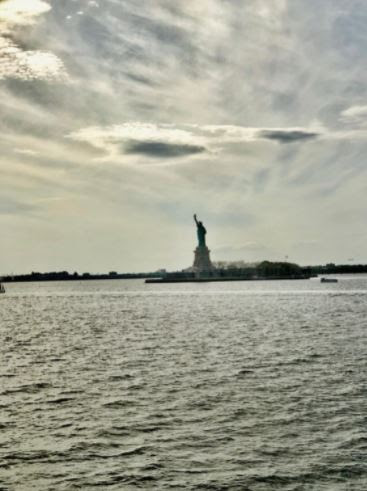 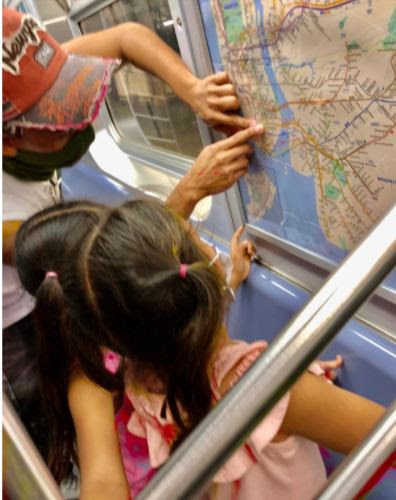 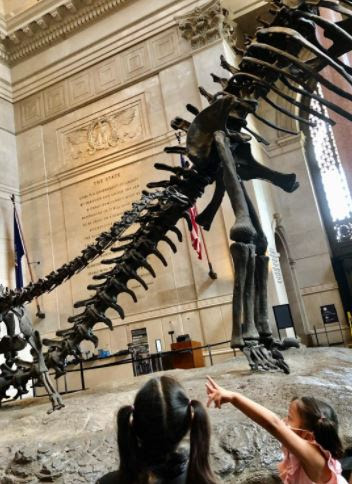 The wonder of MNH! 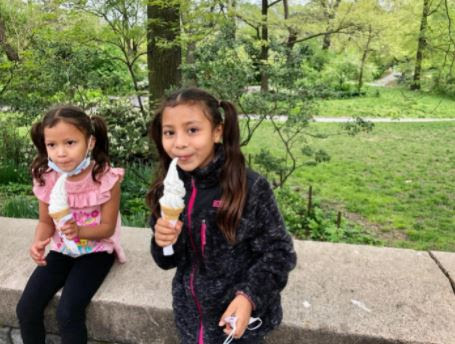 After a long (but great) afternoon of dioramas, soft-serve!!

Wishing you all a Shabbat shalom um’vorach – a peaceful and blessed Shabbat,