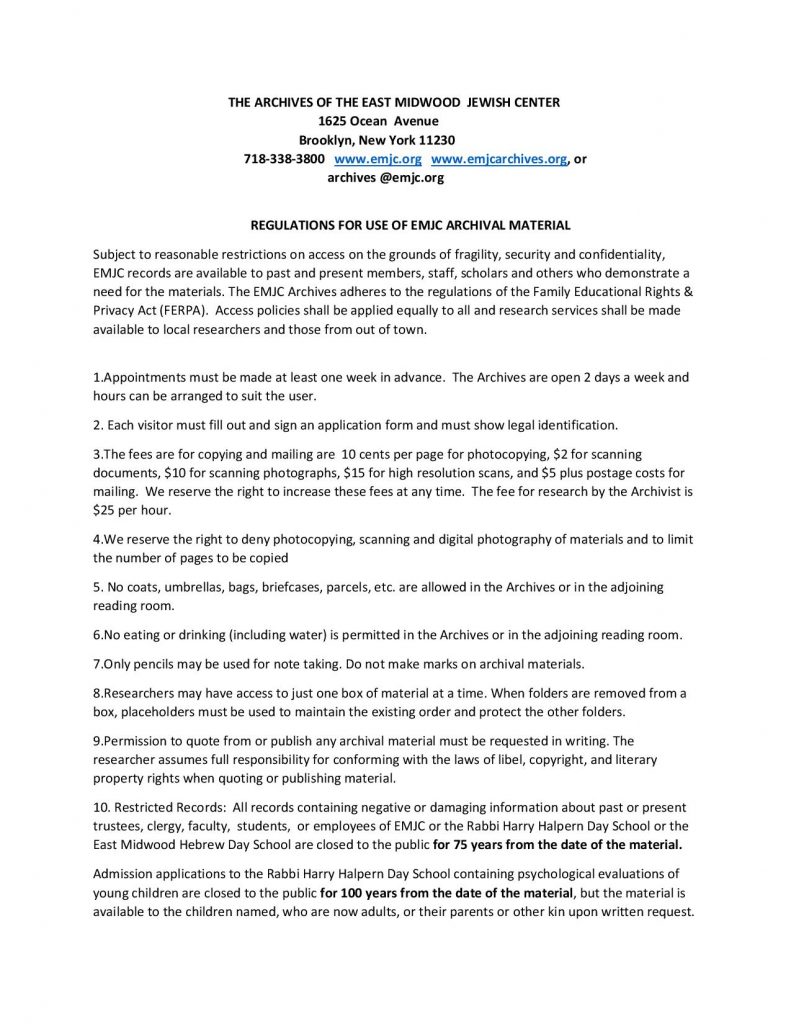 DESCRIPTION: The EMJC Archives preserve and document the history of the congregation:  its membership and lay leaders, its rabbis, cantors, activities , and buildings since its founding in 1924. We encourage research and study of EMJC’s history  and its contribution to the development of Conservative Judaism and the Jewish Community of Brooklyn. The boxes and folders are located in a special room in the East Midwood Jewish Center and are arranged in simple alphabetical order to facilitate research. However, certain subjects are grouped together:  Architects, Cantors, Committees, Executive Directors, Mergers, Presidents, and Rabbis.

CREATOR: The EMJC Archives were arranged and described by Toby Carliner Sanchez, EMJC’s Historian and Archivist

The Founders: The East Midwood Jewish Center was organized in 1924 by a group of new residents in what was then an undeveloped, almost rural neighborhood promoted by real estate brokers as “New Brooklyn.”  Many streets were unpaved, and houses were far apart. The organizers started out by holding meetings in each other’s homes. Their goal from the very beginning was to create a combination synagogue and a community center. It was to be a 7 day a week facility to serve the religious, social and recreational needs of the entire family from childhood to old age and to be open to the wider community. That’s why EMJC was built with a very large sanctuary, seating over 850 people, with two ballrooms, meeting rooms, a gym, steam room and pool.  Many similar synagogue/community centers were created throughout the U.S. in the 1920s, but most of them were sold long ago to churches, converted into schools or demolished. EMJC is one of the last remaining “shules with a pool.” (The Shule with a Pool: The Synagogue Center in American Jewish Life  by David Kaufmann (University Press of New England/Brandeis University Press, 1999)

The founders decided to place their new congregation on a triple lot on Ocean Avenue, a major north-south road. This was a bold statement at a time when anti-Semitism was prevalent, and the 1924 Federal immigration law sharply limited the number of people from Eastern and Southern Europe, namely, Jews and Catholics, who could enter the U.S. each year.

The groundbreaking took place in 1925 and the building was completed in 1929 at a cost of one million dollars.  It was designed by Louis Allen Abramson and Maurice Courland, well known synagogue architects. The exterior is in the style of an Italian Renaissance palacio and the sanctuary is distinguished by its Greek style columns and decorations and a large, multi-colored stained glass globe and 12 stained glass windows in the Tiffany style.

Membership grew consistently from 100 in 1924 to 300 in 1929 (with a significant decline during the Depression) and then reached its maximum of 1 430 in 1963.  It was close to 1000 throughout the 1980s but then began a steady decline as families moved to the suburbs.  In recent years there has been considerable growth in new younger families.

Creation of a Day School

In 1948 EMJC constructed a separate building at 1256 East 21st Street, connected to the Ocean Avenue building by a shared courtyard and a bridge,  to house its very large weekday and Sunday Hebrew School classes (nearly 1000 students). Then in 1956 EMJC opened the East Midwood Academy , a State chartered kindergarten to 8th grade dual language school.  The school has had several different names but was known as Rabbi Harry Halpern Day School from 1978-2006. It was renamed the East Midwood Hebrew Day School until it closed  in 2019.

Placement on the National Register of Historic Places in 2006

East Midwood Jewish Center received this honor, because its original architectural features are unchanged, and because it represents “a distinctive form of American Judaism and is part of the evolution of urban ethnicity in the 20th century.” It was created entirely by local residents, lay people, not by rabbis or Manhattan elites; services were from the beginning conducted in English and Hebrew, and not in Yiddish (as was the rule in older neighborhoods); its members were mostly American born and were a mix of people whose families came from different parts of Europe and not just a specific Russian, Polish, Hungarian or other European town or region, as was usually the case with small congregations).  The placement on Ocean Avenue announced to the world that there was no contradiction between being a loyal American and being a loyal Jew and that a minority group has both the right and duty to retain and develop its culture, while contributing to American life. East Midwood and similar synagogue/ community centers are a unique American invention.

The records of the East Midwood Jewish Center, Inc. (1924 – 20019) contain legal documents, minutes, reports, financial statements, publications, brochures,  and related materials pertaining to its creation and governance its clergy, rituals, educational programs, social activities and its financial history, construction and repairs.  Except for the very early years, the archives contain the minutes of most of the annual membership meeting and the monthly meetings of the board of trustees. Also available are many boxes of membership lists, cemetery records, lists of bar/bat mitzvahs, the students and faculties of the Hebrew school and the day school, the names of brides and grooms, plus records of confirmations and conversions.  Also available are copies of the weekly bulletins published from 1935 to the present, commemorative journals, news clippings and hundreds of photographs of members, students and social events.

The records of its Rabbis (Reuben Kaufman, 1925-28, Harry Halpern , 1929-1977, Alvin Kass, 1978-2014, Aaron Pomerantz, 1980-20080, Matt Carl, 2014-2019) and several associate rabbis are grouped  together under Rabbis. The same is true for its various Cantors (Abraham Hyman, 1936-1955, Joseph Eidelson, 1956-1995, Samuel Levine 2004 to date) and various associate cantors and choir leaders), Executive Directors and Architects.   The records of EMJC’s mergers with Shaare Torah, The Jewish Communal Center of Flatbush and Progresive Shaare Zedek Synagogue are grouped together under Mergers. The membership and student lists have been digitized, but not the rest of the documents.

Appraisals of the Building and its Contents, see also Torahs

Building Plans- A comprehensive list of all architectural drawings, those within folders and also the oversize ones on shelves

History & Evaluation of the Project

Application for Grant for Stained Glass Repair with Letters of Support

Grants to the stained glass project from individuals

(For names, see the separate receipt books for cemetery payments)

Board of Education Committee

Founders:  list of names and photographs,  as printed in the 1949 Journal plus separate folders about some of the individual founders and their descendants

Dispute over Traditional vs. Egalitarian Services

History Notes – excerpted from Board of Trustees Meetings & Annual Meetings

Institute for Living Judaism in Brooklyn

Interfaith Program, also known as the Interfaith Coalition of Brooklyn

Membership Lists -2010 with age of each member (husbands & spouses)

Presidents –separate folders with name & dates of EMJC Presidents boxes may contain photographs, obituaries and information about their descendants

Tee of Life Memorial Plaques in the lobby

Wall of Memory in the lobby

Women on the Board of Trustees

Appraisals of the Building  & Contents

Building Plans – list of all plans, those in boxes and the oversize plans on shelves

History of the School

Law Suits Against the School – alphabetical by plaintiff

Photographs – not yet processed

Tapes   – not yet  processed